According to the director of the Center for Disease Control (CDC) modern medicine is faced with retreating into the past. After years (since the 1990s) of prophesying dire consequences from the overuse of antibiotics, the day has arrived when “the end of the road is in sight” for the use of antibiotics. Along with all the other dire health news, including ebola, and now zika, vaccine ineffectiveness, it all does sound somewhat apocalyptic. That is, worldwide plagues and pestilences in unlikely places.

Who would have thought that the great and mighty USA would, in this 21st century, with all the hype about “modern” science, find itself all but defenseless against microbes. And yet with all the “modern” high tech weaponry at their disposal, the modern medicine men are wringing their hands and feeling so helpless. But why?

Antibiotics, literally means “against life,” or “in place of life.” Antibiotics are homicidal by definition. They are not all that discriminating and kill bacteria at random, including the millions of friendly ones that keep the body functioning smoothly. At the end of the day, while destroying a few thousand microbe terrorists, they have also terrorized, if not decimated, the civilian population of defenseless, harmless bacteria. Beneficial results? Temporary at best. The short concentrated attack by special forces has inflicted casualties among the insurgent bacteria, but the scattered terrorist cell quickly regroups, and wiser for the ordeal, redefines itself with any number of Hollywood disguises, and is soon back at work, most often in a different organ of the body. So go the round of search and kill tactics of the modern medicine man, until the body is infected with “superbugs,” able to disarm any chemical or biological agents thrown at them.

Not knowing what else to do, “modern” medicine continues to prescribe what they know is increasingly ineffective as they race toward the cliff. Leaving aside the whole area of  prevention (improved hygiene, sanitation, and “My 8 Doctors”), are there really no benign remedies we can turn to? Yes there are! Hydrotherapy, medicinal herbs, light therapy, and… charcoal. How can charcoal work in place of antibiotics? 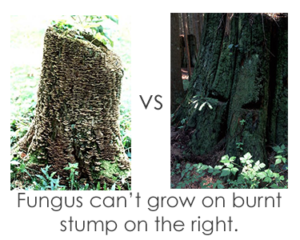 As an illustration, have you ever noticed an area that has suffered a forest fire? If it has been several years since the fire, you will notice there are a number of trees that are still standing, even if they are naked of any foliage. On closer inspection you will see there is no fungus growing on the blackened skeletons. There the lifeless black trees stand somehow protected from the same forces of Nature that reduce other trees (broken down by wind and storm) to a pile of rotting pulp. What is it that is shielding the black trees from the destruction of fungus, mold and bacteria? The layer of black charcoal encrusted about the tree.

Yes, charcoal is antifungal and antibacterial. Antibacterial, not so much in the sense that it kills bacteria as antibiotics do, but in the sense that those bacteria that destroy tissue do not grow well in the presence of charcoal. Also, the charcoal neutralizes the toxins the bacteria produce that break down the cell structure, plant or animal.

What makes some bacteria lethal is the toxins, or endotoxins, that they produce. Bacteria fight using chemical warfare. They produce their own chemical agents that trigger the body to respond in a number of different ways. For example the bacteria associated with food poisoning will trigger nausea, vomiting, and/or diarrhea. Other bacterial toxins trigger fever, pain, inflammation, and a host of hospital diseases known as nosocomial infections—which account for 110,000 hospital deaths a year.

In the case of wound infection, the bacteria produces a toxin that not only destroys tissue (necrosis) but also prevents tissue repair and growth. The dreaded leprosy, anthrax, gonorrhea, MRSA, and the much publicized flesh eating disease, Necrosis fasciaitis, are examples of very aggressive bacteria superbugs. But are they invincible? The impotent drug lords would have us think the only agents able to take out these kinds of superbugs are their own manmade chemical/biological concoctions. But, just because their drugs are increasingly ineffective, does not mean there are no natural remedies that can do the job. Without discounting other natural medicines, let’s review the potential of charcoal.

Ancient Egyptians scorched timbers to use as pilings to make wharves along the river Nile. They were protected from rotting by the thin layer of charcoal crust around the timbers. Maybe it was that novelty that prompted the Egyptians to bury some of their elite in layers of sand and charcoal. Today, large burial crypts have been discovered in different continents, that consist of several tons of charcoal encapsulating the dead body. Aside from looking dehydrated, these bodies are well preserved with no odor associated with bacterial decay.

Modern technology continues to use activated charcoal to stop or modify bacterial action. The most notable way is in the production of Activated Carbon Cloth (ACC) used in Nuclear Biological and Chemical warfare suits. Do you recall the anthrax scare after 911? ACC cloth is able to neutralize anthrax as well as other potent biological agents without using any toxic compounds. Of course 1500 B.C. plain charcoal had already been proven as an effective treatment for anthrax. So why all the fear of anthrax in the 21st century? Because modern wonder drugs do not work, and because of money. Money? Because charcoal cannot be patented the drug companies have little incentive to develop charcoal health products which would compete with their proprietary drug poisons.

People need to understand that drugs do not cure disease. They may afford some temporary relief, but in most cases the drugs only change the form
and location of the disease. The pharmaceutical associations use a snake drinking from a cup of poison as the symbol of their trade. The American Pharmacists Association goes a step further and employs the Ouroboros – the snake eating its own tail. It embodies the thought that the drug can somehow be both the cause and the cure of a disease. How illogical, but certainly profitable, is that!

For those worn and torn with years of drugging, there are still benign remedies still potent enough to handle many of the scourges of ancient and modern sorcery. For example, fragments of the super C60 molecule, Bucksminsterfullere, the most powerful molecule known to man, are found in the lowly charcoal. How fascinating is that? And how more fascinating that these molecules are able to extend the lifespan of laboratory rats up to 90%.

While antibiotics are ready to plunge off the cliff into the abyss, activated charcoal is a potent and safe substitute. Get some today.