The simplest description of charcoal is the cold hard black remains left over after your campfire has gone out. Essentially all the water has been evaporated off (Pyrolysis), along with some volatile constituents, leaving behind the familiar crusty crumbly black chunks. Now charcoal can be made from the bones of animals, or coal, but for medicinal use it has historically come primarily from plant-based sources such as hardwood, bamboo, coconut, or peat. But, what is left after the fire goes out is, apart from a few trace minerals, pure carbon, just like the carbon atoms that make up the soft graphites in a “lead” pencil or the 345 carat diamonds in a golden crown. What makes the carbons different from each other is their distinct physical structures.

The carbon atoms in the graphite molecule lie in parallel sheets that allow them to “shed” easily in layers.
Diamonds 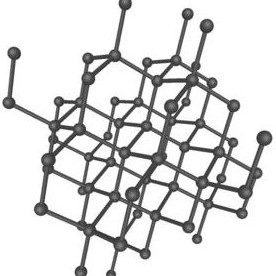 On the other hand the carbon atoms in a diamond are arranged in a 3-dimensional framework that reinforces each facet of its perfect cubic structure, making it the hardest mineral known.
Charcoal
Then there is charcoal. It has an intricate lattice-like design with no recognizable pattern. Quite invisible to the eye is the tremendous surface area hidden within the countless folds and cracks of the charcoal particles. It is to this large surface area that a vast number of chemicals (primarily those that are poisonous to life), bind electrostatically (Van der Waals force). It is this tremendous surface area that science began to more fully harness during the late 1800s leading to the “activation” of raw charcoal.
By subjecting the raw charcoal to the “activation” of oxidizing agents such as air, steam, or oxygen, at high

Charcoal manufacturers have developed different activation processes so that they can control to a large degree the size of these pores. In this way different charcoals can be designed to match the molecular sizes of the “pollutants” that are being targeted. These pores range in size from small to even smaller (50µ in diameter down to under 2µ).
Manufacturers of charcoal first look at the impurities to be removed from a substance. They then select the material and activation process that best match the impurities. For example, proteins are generally large molecules and are found in most natural products. Next come coloring compounds. The range continues all the way down to the very small, relatively volatile odor compounds. Industry has been able to produce charcoals with internal structures and pores that match these various molecular sizes.
Activated charcoal works through several different mechanisms. Adsorption* (not to be confused with absorption), the most well known mechanism, acts by electrostatically binding molecules to the surfaces of the charcoal particle – technically known as Van der Waals forces, or chemisorption. Then there are chemical reduction reactions – as when charcoal is used to remove chlorine from water. Activated charcoal can also catalyze a number of chemical conversions, or can be a carrier of catalytic agents such as precious metals. An example is using silver impregnated charcoal to disinfect water. Charcoal can also act as a carrier of biomass, as in supporting material in biological filters used in your backyard goldfish pond. Another function is as a carrier of chemicals as in slow release color applications – food dyes and pigments. Are there more mechanisms? Scientists suspect there are.*adsorb/adsorption – technically, a surface-based adhesion of atoms, ions, molecules from a gas, liquid, or dissolved solid, as distinguished from absorption which involves the entire volume of the material. To put it into simple terms – when you eat a banana cream pie you absorb it; when you get a banana cream pie thrown in your face you adsorb it.
Buckyballs
In 1985 researchers H. W. Kroto and R. E. Smalley were curious about the atmosphere of giant red stars. It was known that carbon forms cluster molecules under such conditions. Among other carbon species,

they detected the carbonmolecule C60 for the first time.  It possessed unique physicochemical properties, extra stability, as well as some previously unexplained phenomena. To account for these features, they proposed a geodesic-like structure, one that essentially looks like the pattern on a soccer ball. Consequently the molecule was named after Buckminster Fuller, the inventor of geodesic domes (made famous at the 1967 World’s Fair). Buckminsterfullerene (fondly referred to as “Buckyballs” amongst some researchers) is the chosen name for C60, whereas the name fullerene is conveniently used for this whole family of closed carbon cages. They may not be as big as giant red stars, but these microscopic cells have gigantic appetites.

In 1999 Eiji Osawa, and colleagues at the Toyohashi University of Technology in Japan, demonstrated that C60 can also be extracted from wood charcoal.  As a result, many researchers now visualize charcoal as a structure made up of fragments of these “Buckyballs”. Along with the discovery of nanotubes or “Bucky onions” there is the suggestion of new magnetic and

electrical properties. It all sounds a little bit like science fiction. No doubt in time these latest models for charcoal will again be modified. In the meantime charcoal still mystifies even the informed. Scientists marvel as they continue to ask, “How is charcoal able to…?”
Henry Schaefer is the resident Quantum Chemist at the University of Georgia and Professor of Chemistry, Emeritus, at UC Berkeley. He is the third most quoted chemist in the world. He writes of his different discoveries: “The significance and joy in my science comes in those occasional moments of discovering something new and saying, “So that’s how God did it!” How is charcoal able to…? God knows.
A Mystery
Being skeptical by nature, I want to know how a thing works. Naturally then, I want to know why/how charcoal works. I can hardly blame some people for questioning charcoal as a remedy. If they ask how it works, science has no complete answer. For some minds, that will mark the end of their interest. For those who may be critical because there is no complete “rational” explanation as to how charcoal works, may I point you to the classic drug reference for students and practitioners, The Pharmacological Basis Of Therapeutics by Goodman and Gilman. Goodman writes, “There are few drugs, if any, for which we know the basic mechanism of action. Drug action is not drug effect. The effect results from the action of the drug.” Regarding the use of nitroglycerin to moderate attacks of angina, Gilman goes on to write, “The mode of action of nitrates to relieve typical angina is not fully understood.” The same may be said of charcoal. The positive effects of charcoal as a remedy are well documented, as you will see below. While the question of how charcoal works remains unclear, as it does for most drugs, there is one big difference. Charcoal has no known poisonous side effects.
The Future of Charcoal
From the dawn of civilization, man has had an intimate relationship with charcoal. As man and his technology have advanced, so too have the environmental consequences increased. History tells us vast tracts of forests were denuded to meet the demand for the prized charcoal to change rock and sand into metals and glass. But the metals and glass used to build, beautify, and conquer with were a two-edged sword. As the land suffered from the thoughtless clear-cutting practices, the atmosphere and streams also began to feel the added burden of industry’s pollution. And, with the polluting came new diseases.
As time has marched on, technology has proliferated and, not surprisingly, so too has disease, on land, in air and sea, in plants, in animals, and in man. Two thousand years ago, in the midst of the Iron Age, Paul of Tarsus recognized even then, that “The whole creation groans and labors as in the pains of childbirth right up to the present”.  How well it describes our environmental concerns today.
But, we have not been abandoned to our wastelands of pollution and disease without help. The simple benefits of the humble charcoal have also been magnified and exploited, almost beyond imagination. Charcoal has been found more than capable of disarming the lethal properties of thousands of man-made pollutants. Science is employing charcoal in countless ways as it tries to stem the tide of exponential growth in disease in both the animal and vegetable kingdoms. Whether you are living within easy access of the technological advances of North America, or hiking the trails of some developing country, charcoal is just as modern as it was four thousand years ago, just as universal, just as versatile, and just as powerful. In a world being poisoned by its own near-sighted wisdom, God the Creator has provided man with a microscopic black hole big enough to swallow much of what ails us. CharcoalRemedies.com pp. 38-40.
Menu