Dubbed the new “Gulf War” syndrome, deep oil well Horizon is vomiting out thousands of barrels of crude oil daily into the Gulf of Mexico, and with it an ever-growing list of health risks including benzene poisoning from the high levels of Benzene and Corexit being used as an oil dispersant in the massive oil spill cleanup. (see Benzene Description at bottom of page) As more and more complaints of nausea, vomiting, dizziness are being reported many are looking for lawyers and attorneys. Another group are anxiously asking and searching for some remedy that can prevent or help to minimize the effects of possible Benzene poisoning exposure. The short answer is activated charcoal. Activated charcoal is well known to neutralize benzene and has been used in gas masks for that purpose for decades. But, what is not widely known is that activated charcoal when taken internally is also a well-documented antidote for benzene poisoning, and is recommended by the Poison Control Centers and CDC.

The Center for Disease Control (CDC) for Benzene poisoning recommends:

“If the patient is alert, administer a slurry of activated charcoal if not done previously (at 1 gm/kg, usual adult dose 60-90 g, child dose 25-50 g). A soda can and straw may be of assistance when offering charcoal to a child. When small amounts of benzene have been ingested, activated charcoal may be administered orally without emptying the gut.”

The following true story, with a little modification, could fit a war scenario. Below is the remarkable story of an industrial worker who was exposed to extremely dangerous levels of benzene but suffered none of the poisonous side effects mentioned above. The original letter was addressed to Enos Yoder:

“I am a certified pipe welder who lives in Columbus, Ohio. In 1994, I was working in a refinery in Lima, Ohio. I was working second shift, from six p.m. to six a.m., seven days a week. On the night of October 14, while I was on my way to work, the news report said rain was expected after midnight.

About 1 a.m. a fine mist of rain started to fall. About fifteen minutes later a safety man at the refinery came running up. He told the eighteen men in my crew to report to the designated safe tent and wait for further instructions.

At five a.m., while we were still sitting in the tent, a bus pulled up. The supervisors came in and said that we were all going to the hospital for blood tests. The tests would be sent to the company and paid for in full by the contractor. What we thought was rain, was actually benzene spraying out of a tower 175 feet in the air. A half mile away, a refinery employee had accidentally turned the wrong valve and exposed us to one of the most carcinogenic substances in the United States. Benzene affects the eyesight, nervous system, kidneys, and liver.

When we arrived at the hospital we were all given blood tests. These tests revealed that all eighteen of us had dangerous levels of benzene in our blood systems. The doctors at the hospital explained that it would take up to a year for the benzene to leave our systems, and the damage it would do would vary from blindness to liver cancer to kidney failure, and highly possible to death. There was no known treatment to remove the benzene from the blood.

That morning there were eighteen very scared men, who had come from all over the United Stated to earn a living for their families. Their lives were now being given an expiration date of five to seven years. The next day we were all laid off. The company said they were sorry for what had happened and wished us the best of luck. 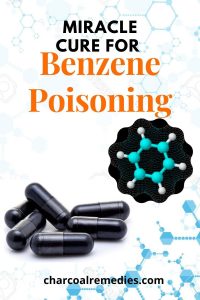 Because of my fulfilling relationship with Christ, that day I prayed. Immediately, the name of a man I had visited a year earlier came to my mind. When I got home I called Enos. He said to just come on up. I did, and he gave me a bag of Charcoal Capsules. He said to take three capsules, three times daily, and not to skip any capsules.

After taking the charcoal capsules, I made an appointment with my family doctor. I told him about the benzene and asked for another blood test. When the test came back a week later, it showed that I had no benzene in my system. The doctor said that my case had caused him to spend a lot of time reading about benzene and, according to all he had read, there was no way the body could rid itself of benzene in less than twelve months. He said that the lab knew this also, and they would give me another test for free. Those results also came back, NO BENZENE in my body!!!

About six months later, the contractor refused to pay for any testing done to me. This led to a court action because federal law, workman’s compensation, and O.C.C.A. regulations said the contractor was fully responsible. Approximately three years later I went to court.

Upon arriving, I met a man who was scheduled to appear in court at the same time as I was. After introductions, it turned out that he was with a law firm representing seventeen men who had filed a class action suit due to benzene poisoning in Lima, Ohio in 1994. The court did not know that I was not part of that lawsuit, and had scheduled me at the same time in the same courtroom. The attorney explained to me that two of his clients suffered from blindness, four were on kidney dialysis, and all were being treated by a neurological psychiatrist. The lawyer was amazed that my benzene level had been more than twice that of any of his clients, yet I had no health problems whatsoever. He said that it was nothing short of a miracle for me.

To that I first said, ‘Thank you Jesus for watching over me,’ and second, ‘Thank you Enos Yoder for being there, and caring the way you do.’”

CharcoalRemedies.com The Complete Handbook of Medicinal Charcoal & Its Applications pp 131 – 133

NOTE: Even though the dosage of 3 charcoal capsules taken three times a day was obviously effective, the initial dosage should be more in line with the recommendations of the Poison Control Centers and CDC mentioned above. Remember, when it comes to poisoning you can take too little charcoal to do any good, but it is hard to take too much. The FDA lists activated charcoal as Category 1 “Safe and Effective” for poisoning. Be sure to drink plenty of water with each dosage. We recommend to do as much research as possible, be sure to read our FAQ page, and, if available, you can check with the Poison Control Centers. Editor.

An obvious defense against breathing potentially contaminated air is an Activated Carbon Cloth (ACC) mask. These masks all but equal toxic gas adsorption rates that the large cumbersome granular activated charcoal canister masks achieve. They are about as heavy as the common dust masks sold in hardware stores except they have a layer of ACC cloth sandwiched in the middle for lightning fast adsorption of hundreds of different noxious odors or poisonous gases. They have a decent lifespan IF you take the time to put them in a sealed jar when not in use. They can be hand washed to remove any soiling and allowed to sun dry. NOTE: washing does not reactivate the cloth or extend its lifespan.

Benzene is an organic chemical compound (aromatic hydrocarbon) with the molecular formula C6H6. Benzene is a colorless and highly flammable liquid with a sweet smell and a relatively high melting point. Benzene is an important industrial solvent and precursor in the production of drugs, plastics, synthetic rubber, and dyes, and, up until recent times, has been a common additive in gasoline. Benzene is a natural constituent of crude oil. But Benzene is classified as a human carcinogen.

While low-level exposure to benzene may cause drowsiness, dizziness, rapid heart rate, headaches, tremors, confusion, and unconsciousness, eating or drinking foods containing high levels of benzene can cause vomiting, irritation of the stomach, dizziness, sleepiness, convulsions, and death.

Benzene damages the bone marrow and can cause a decrease in red blood cells, leading to anemia. It can also cause excessive bleeding and depress the immune system, increasing the chance of infection. Benzene causes leukemia and is associated with other blood cancers and pre-cancers of the blood.

Benzene targets the liver, kidney, lung, heart and the brain and can cause DNA strand breaks, chromosomal damage etc. Benzene causes cancer in both animals and humans. Benzene was first reported to induce cancer in humans in the 1920s. Today, human exposure to benzene is a global health problem.

To find out more how charcoal can be used in cleansing and detox programs, order the book CharcoalRemedies.com now. 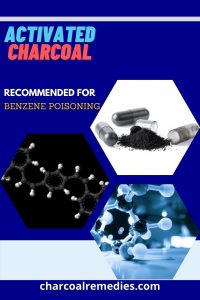 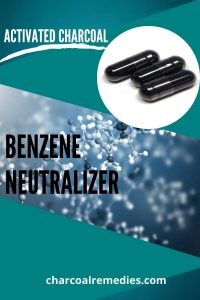