Cholesterol: The Good, The Bad and the Ugly

Cholesterol is an essential nutrient. But the body produces more than it requires and does not need to be supplemented with extra cholesterol from one’s diet. In fact, for most people the problem is having far too much dietary cholesterol, which, as we all know, increases our risk of death from coronary heart disease.

Natural Therapies That May Work

According to an article by Mayo Clinic, diet and exercise are the only two scientifically proven natural ways to reduce cholesterol. That said, they go on to provide a list of ten cholesterol lowering supplements that may reduce total cholesterol. In other words, there are no scientific studies to back up the claims, and thus, they cannot say with certainty.

Natural Therapies that may work according to Mayo Clinic include:

The Only Proven Cholesterol Lowering Supplement

Kidney International Supplement (June 1978) demonstrated that activated charcoal is able to significantly reduce serum triglycerides (up to 76%) in severely hyperlipidemic patients, and suggested that “charcoal may find applicability in the management of azotemic diabetic and nephrotic hyperlipidemia.”

These findings were again confirmed in a Finnish study reported in the European Journal of Clinical Pharmacology in 1989. Seven patients were fed 4,8,16, or 32g of activated charcoal per day. “Serum total and LDL-cholesterol were decreased (maximum 29% and 41%, respectively) and the ratio of HDL/LDL- cholesterol was increased (maximum 121%) by charcoal in a dose dependent manner.” 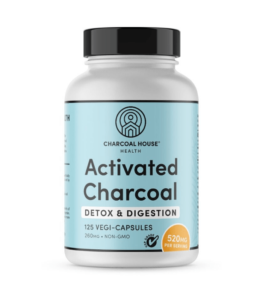 Microscopic tissue examination shows that a daily dose of activated charcoal may prevent many cellular changes associated with aging – including decreased protein synthesis, lower RNA activity, organ fibrosis as well as sclerotic changes in the heart and coronary blood vessels. We can safely say, as an anti-aging adjunct to a total health program, the above cumulative effects of charcoal upon one’s blood chemistry, may add up to a longer life and improved overall health.

Here are lab tests to demonstrate that what can happen when charcoal is taken internally may also be effected when applied externally.

In a letter to his doctor, Peter writes, “Following my liver biopsy test last January, you wrote me to advise that the biopsy was essentially normal, and that there was no further treatment needed at this time. While I appreciate such good news, I also took the advise of a close friend who suggested an old fashioned remedy that would expedite my liver returning to it’s normal function and enzyme level. Since last February, I have been drinking a large glass of water every day that contains a large tablespoon of activated charcoal.

For the first month or so I also slept at night twice a week, with a charcoal poultice taped over my liver. Last week I had my doctor in Mt. Vernon, draw some blood and run the liver tests again for me. The results were, I thought, truly amazing. Alkaline Phosphatase—99 down from 218; GGTP—9 down from 302; SGPT—31 down from 229.

“During this same period all the symptoms of my hiatal hernia have disappeared, my cholesterol level has dropped from 293 to 270, and my triglycerides level from 299 to 260. I hope this updated report is of interest and possibly assistance to you in treating similar patients.”

One can only hope that Peter’s doctor made good use of this clinical proof of charcoal’s detoxifying and restorative powers. But whether he did or not, these benefits are ready to accrue to your health too just as soon as you put charcoal to work. CharcoalRemedies.com page 157

Charcoal has more than proven its ability to swallow up most any poisonous modern drug thrown its way. And, as we have already noted charcoal, directly or indirectly, lowers blood cholesterol, LDL, and triglycerides, which significantly increase the risk of heart attack or stroke. In studies conducted in 1926, 1976, and more recently in 1986, cholesterol levels in blood were reduced by as much as 43% and triglycerides by 76%.

This promises some immediate benefits to heart attack victims. However, low levels of blood fats returned to previous high levels within four weeks after stopping charcoal, indicating once again that charcoal does not replace a good program of total health. It would be poor judgment on the part of those who suffer from heart disease, to take charcoal to lower blood fats without simultaneously adjusting their dietary fat intake and exercise.

To find out more how charcoal can help you reduce elevated blood cholesterol and to treat other common ailments, simply and naturally, right in your home, order the book CharcoalRemedies.com now. 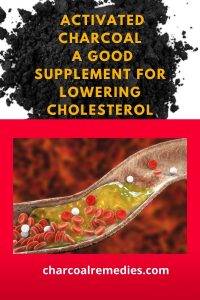 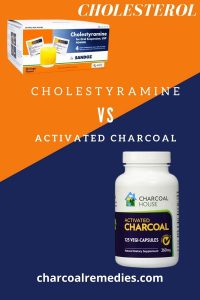 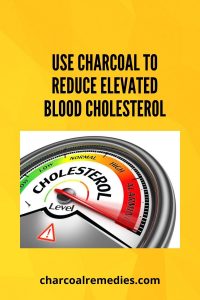 Hi, I’d like to receive your free ebook, but keep getting an error message.