People with diabetes, and it seems most often the elderly, are prone to poor circulation in their extremities, and as a consequence frequently develop ulcers on their legs or feet. Often the ulcers become infected, and, tragically, these sufferers are faced with losing their toes or worse.

“I remember well one early request for our help. I was approached by a man who was very concerned for his elderly mother. He described an open lesion the size of a silver dollar on her foot. She had been attended by different physicians, but the condition had not responded to conventional medicine. I suggested that he have his mother soak her foot twice a day in a charcoal footbath with enough water to cover the ulcer. After inquiring into her eating habits, I also suggested some dietary changes that I felt would improve her circulation.

A month later when the man brought his mother to meet us, the ulcer had shrunk to the size of a quarter. However, we noticed that her legs were dark blue from the knees down, a condition that her son had failed to mention during his first visit. The son asked if his mother could stay with us. Because of our primitive conditions, we were not well prepared to take her in, but we wanted to help. By the end of a month, with daily charcoal baths for the feet, the sore had completely healed over. Equally important, by maintaining a strict low fat diet of whole grains, fruits and vegetables, both her legs regained good circulation and their normal color. CharcoalRemedies.com page 24

Dr. Marjorie Baldwin, MD, of the Wildwood Hospital, Georgia, has often used activated charcoal to promote healing. She says that any inflammation, any area that is red, painful, swollen, and hot, responds to charcoal. She applies charcoal as a poultice if the inflammation is on the outside of the body, or gives it by mouth if the inflammation is in the digestive tract. Dr. Baldwin tells of a young woman with diabetes, who had developed ulcers on her feet and was threatened with gangrene. Her husband had frantically taken her to a very well known medical clinic in the Midwest. When the feet did not respond to careful treatment including antibiotics, she was told that she would need double amputation. She absolutely refused amputation, saying, she would rather die than live without her feet. Instead they went to Wildwood Hospital and Dr. Baldwin took charge of her case.

She writes in her e-mail, “I had the severely damaged feet put into separate double plastic bags partially filled with a slurry of charcoal and water at body temperature. The baggies were loosely tied above the ankles and a pillow was used to prop up the knees to keep the charcoal around her feet and from running out. When we completed applying the poultices, I and my helpers gathered around our patient and asked the Lord to bless the treatments and to guide our minds as to what more we could do.” 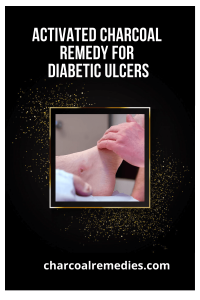 Except for a brief period each morning when her feet received a sunbath and were allowed to dry, they were kept in the bags around the clock, with the charcoal mixture being changed four times a day. Her diet was also supplemented with extra Vitamin A in the form of a daily glass of carrot juice. This program restored her health, she was dismissed from the hospital, and she walked out on both feet! CharcoalRemedies.com page 107

Br. Daniels related this story with us after a Seminar we conducted recently in New York:

“My mother is aged and diabetic. She stepped on a needle and developed an infection on the bottom of her left foot. At one point she was hospitalized. They would give her antibiotics. The wound would begin to heal and then become reinfected again. When I went to visit I began a treatment of charcoal poultices, a simple cleansing diet (including dandelion tea and soybean tea). In 4 days she was able to put her shoe back on!”

To find out more how charcoal can help you treat diabetic ulcers and other common ailments, simply and naturally, right in your home, order the book CharcoalRemedies.com now. 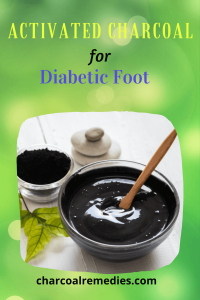 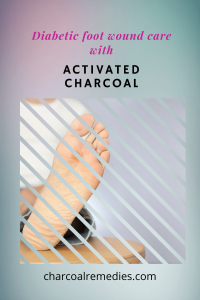 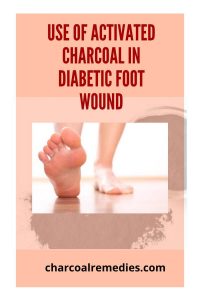 We have used John & Kimberly’s product
Charcoal for many issues
and highly recommend this
book in your home library
for natural healing.
We have seen a miraculous change in a leg ulcer
go from 2″ down in size in a short time.
The book that John & Kimberly have written
is a must have in every home to help in all
health issues. Very well written and have told
others as well. God Bless you Both..