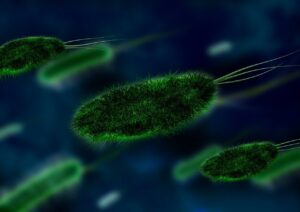 The following report (MedicalNewsToday.com May 5, 2005) discusses the use of ACTISORB Silver 220, an antimicrobial wound dressing, used to reduce MRSA infections. ACTISORB Silver 220 (Johnson & Johnson) is composed of an activated charcoal wound dressing impregnated with metallic silver. The silver is bound to the charcoal and so does not leach out and potentially enter the body. The obvious question is, “Can I make my own activated charcoal/colloidal silver wound dressing, and can I expect similar results? The obvious answer is “yes.”

It should be noted that while the article plays up the antimicrobial characteristic of colloidal silver it studiously ignores the long established antibacterial characteristics of charcoal. As clear evidence of charcoal’s ability to stop many bacteria in their tracks please note the difference in these two pictures of tree stumps. The bacteria and fungus-free stump on the left with a layer of charcoal after being scorched by a forest fire, and the other without the same antibacterial, antifungal benefits of charcoal.

A new treatment protocol to reduce MRSA infections using an antimicrobial wound dressing ACTISORB* Silver 220 at open treatments sites is so successful that it has been made standard policy across the Doncaster and Bassetlaw NHS Hospitals Trust1.

The procedure was developed by two nurses, who were concerned at the level of MRSA infections at open treatment sites such as, percutaneous endoscopic gastrostomies (PEG), tracheostomies and central venous catheters. They carried out a small open study in nine patients with MRSA infected PEG sites. With good wound care, wrapping ACTISORB* Silver 220 around the wound entry site eradicated MRSA and the majority of wounds improved in one week. Since implementation of the peri-PEG skin policy, hospital admissions due to PEG problems have been markedly reduced with being people cared for in the community2,3 .

Sisters Kathy Leak, and Sue Johnson Doncaster Wound Care Service say: “Evidence shows that silver is a good antimicrobial agent. ACTISORB* Silver 220 was the logical choice as it is effective against MRSA and is the only dressing that does not deliver silver directly into the body, avoiding potential toxicity problems.

“MRSA often lives completely harmlessly on the skin. However, when a patient’s immunity is low during illness intravenous catheters or PEG sites give bacteria access to the tissues, where failure to manage colonisation can lead to serious infection problems and subsequent bacteraemia. The key to dealing with MRSA is to prevent its spread by good hygiene. In wounds and other breaches in the skin, MRSA can cause infection. In such cases it is vital to implement standard wound care and nursing practices to control the problem. Early action can reduce morbidity.

Infection is common at PEG sites where a tube is placed through the wall of the abdomen to feed the patient. This can remain in place for a month or more. An examination of all inpatient PEG sites at Doncaster Royal Infirmary found that 90 per cent had tissue maceration or overgranulation2 – an ideal breeding ground for MRSA and other bacteria4,5. The majority of the patients were from nursing homes, so the pilot study was carried out at one nursing home where swab tests revealed a high prevalence of MRSA3.

In all nine patients ACTISORB Silver 220 was applied around the tube at the wound entry site. All patients were swabbed at the first visit and then weekly until 3 clear swabs were obtained (according to infection control policy). As the dressing cannot be cut it is folded around the wound entry avoiding skin-tape on application. The dressing was changed as needed to manage exudates and rotated at each dressing change to ensure that all of the skin is covered. In every case a negative MRSA swab was obtained by week 3 and in 4 cases by week 13.

ACTISORB* Silver 220 is clinically proven to manage bacterial infection and critically colonized wounds6. This silver charcoal dressing adsorbs toxins and other agents, which have an inhibitory effect on wound healing7. Its broad-spectrum antimicrobial activity is effective against 151 bacterial pathogens, including MRSA8. It has been shown in PEG sites to visibly reduce infection, MRSA colonisation and overgranulation of wound tissue2.

Kathy Leak remarks: “As this simple economical method is non-invasive it could also be used as a preventative measure in those patients most at risk, including the immunosuppressed, diabetics and those with a history of infection problems.” A comparable product to the ACTISORB* Silver 220 can be ordered by clicking here.

MRSA is a form of the bacterium Staphylococcus aureus, which is resistant to methicillin, an antibiotic commonly used in its treatment.

The antibacterial properties of silver have been known and applied for centuries9. The large body of research shows that it produces structural changes in bacterial cells and interacts with DNA to inactivate bacteria9.

9. Russell and Hugo. Antimicrobial Activity and Action of Silver. In: Progress in Medicinal Chemistry, vol 31; 1994.

How do you prevent MRSA?

The key to dealing with MRSA is to prevent its spread by good hygiene. In wounds and other breaches in the skin, MRSA can cause infection. In such cases it is vital to implement standard wound care and nursing practices to control the problem. Early action can reduce morbidity.

How to treat MRSA naturally?

A new treatment protocol to reduce MRSA infections using an antimicrobial wound dressing ACTISORB* Silver 220 at open treatments sites is so successful that it has been made standard policy across the Doncaster and Bassetlaw NHS Hospitals Trust1. They carried out a small open study in nine patients with MRSA infected PEG sites. With good wound care, wrapping ACTISORB* Silver 220 around the wound entry site eradicated MRSA and the majority of wounds improved in one week.

How do you treat MRSA at home?

Nurses at Doncaster Wound Care Service have successfully treated MRSA infections with an activated carbon wound dressing impregnated with silver. On average, wounds improved within one week, and hospital admissions have markedly decreased with a majority of patients applying the wound dressings at home.

Hi! I’m at work surfing around your blog from my new iphone 4!
Just wanted to say I love reading your blog and look forward
to all your posts! Keep up the outstanding work!

It’s a shame you don’t have a donate button! I’d most certainly donate to this brilliant blog!

I suppose for now i’ll settle for bookmarking and adding your RSS feed to my Google account.
I look forward to brand new updates and will talk about this site with my Facebook group.
Chat soon!

Fantastic website. Lots of helpful information here.
I’m sending it to some friends ans also sharing in delicious.
And naturally, thank you in your effort!

Great blog here! Also your site loads up very fast!
What host are you using? Can I get your affiliate link
to your host? I wish my site loaded up as fast as yours lol

Hello to every one, because I am truly eager of
reading this webpage’s post to be updated daily. It carries fastidious data.

Hello there! This is my first comment here so I just wanted to give a quick shout out and say I truly enjoy reading your articles.
Can you recommend any other blogs/websites/forums that go over the same subjects?
Thanks for your time!

Here is my page delta 8 thc

Admiring the dedication you put into your website and detailed
information you provide. It’s great to come across a blog every once in a while that isn’t the same
out of date rehashed material. Fantastic read! I’ve saved your site
and I’m adding your RSS feeds to my Google account.

Currently it looks like Movable Type is the preferred blogging platform available right now.
(from what I’ve read) Is that what you’re using on your blog?

This info is worth everyone’s attention. How can I find out more?

Great goods from you, man. I’ve understand your stuff previous to and you are just extremely great.
I actually like what you’ve acquired here, certainly like what you’re stating and the way in which you
say it. You make it enjoyable and you still care for to keep it wise.
I cant wait to read far more from you. This is really a wonderful
website.

This website was… how do you say it? Relevant!! Finally I’ve found something that helped me.
Cheers!

I am regular visitor, how are you everybody? This post posted at this web site is actually nice.

Hello! I just now would choose to provide a large thumbs up for any excellent information you have here for this post. We are returning to your blog to get more detailed soon. https://comparethehosts.com/blog/how-to-fix-pii_email_37f47c404649338129d6-error/

Hello I am so delighted I found your webpage, I really found you
by error, while I was researching on Yahoo for something else, Anyways
I am here now and would just like to say kudos for
a marvelous post and a all round enjoyable blog (I also love the theme/design), I don’t have time to go through it all at the moment but
I have book-marked it and also included your RSS feeds,
so when I have time I will be back to read much more, Please do keep up the excellent b.

I am not positive the place you’re getting your info, however great
topic. I needs to spend a while finding out
much more or understanding more. Thank you for magnificent information I was on the lookout for
this info for my mission.

Spot on with this write-up, I actually believe this amazing site
needs far more attention. I’ll probably be returning
to read through more, thanks for the information!

I love your blog.. very nice colors & theme. Did you design this website yourself or did you hire someone to do it for you?
Plz respond as I’m looking to create my own blog and would like to find out where
u got this from. kudos