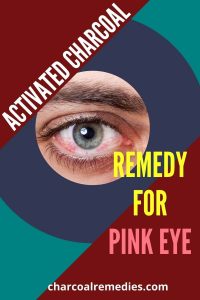 Conjunctivitis, commonly known as pink eye, is an infection of the conjunctiva—the outer-most layer of the eyeball. The three most common types of conjunctivitis are viral, allergic, and bacterial. Viral and bacterial conjunctivitis are typically contagious. The viral type is often associated with an upper respiratory tract infection, cold, or sore throat. The allergic type occurs more frequently among those with allergic conditions. When related to allergies, the symptoms are often seasonal. Allergic conjunctivitis may also be caused by intolerance to substances such as cosmetics, perfume, or drugs. Bacterial conjunctivitis is often caused by bacteria such as staphylococcus and streptococcus. The severity of the infection depends on the type of bacteria involved.

Bacterial conjunctivitis: stringy discharge that may cause the lids to stick together, especially after sleeping, swelling of the conjunctiva, redness, tearing, irritation and/or a gritty feeling, usually affects only one eye, but may spread easily to the fellow eye.

Activated charcoal applied as a liquid eye wash or as a poultice is a very fast and effective treatment for pink eye and other eye infections.

When Jeff and Bobbi moved to Papua New Guinea they settled into a village of about one thousand people. Pink eye was so prevalent that each family had one or two members who suffered with it. It is very contagious. Over the phone, Bobbi told me that she developed pink eye not long after arriving there. “People were so friendly and eager to shake our hands and hug us…”

“Shortly after we got set up, Ulato, a mother of two, came to us with a quilt over her face. Her eyes were so sensitive to light she couldn’t stand to have them uncovered. We gave her the charcoal water* to take, and by the fourth day her eyes were clear. She had been in so much pain.

“Gege was a young mother of three boys. The middle son had pink eye so bad that his eye was swollen shut. She told us the charcoal was not working. It seems that she was just dabbing a cloth in the charcoal water* then dabbing the corner of the eyes. But after we explained to her just to pour the mixture and to let it wash over the eye, her son was cured within days. Most of the cases had a discharge from the eyes and the white of the eyes was an angry pink.

“We tried the standard antibiotics but found the charcoal to be ten times as effective. In fact, when we left, the whole village was virtually free of pink eye, and the people only wanted charcoal to treat it.” CharcoalRemedies.com page 133

*Charcoal water: Stir charcoal powder into a container of water, allow the charcoal to settle out, then pour off the gray water into a separate container. Tilt the head and apply the charcoal water at the inside corner of the eye with an eye dropper, and let the water wash over the eye. Repeat procedure twice a day.

Dr. Wynn, MD, relates: “About ten years ago I was working outside wearing an old army surplus jacket. For some reason, I reached up with my arm and the coat briefly touched my eye. It felt as if I had slightly scratched the eye. It was irritating, but I thought it was nothing and would soon pass. But it didn’t. After a couple days the eye was still bothering me. It felt like a grain of sand in my eye, but as hard as I looked, I could not see anything. I asked Dr. Don to look at it, but he couldn’t see anything either. Finally I went to see an ophthalmologist. He searched, but could see nothing, and decided that I had a reactive inflammation on the eyeball. He suggested steroids and an analgesic. In fact, he put one drop of the painkiller on my eye, and it gave me the first relief I had had in days. But, within a half hour the eye was again bothering me. I asked the doctor what the danger was of not using the drugs. He said the eye could become permanently scarred.

“That afternoon, back at Uchee Pines, I was giving a class, and I mentioned my eye problem. One woman thought of a charcoal poultice for the eye, and immediately went and prepared some charcoal jelly with flax seed, enough to make several small poultices. But I didn’t have time to put one on until that evening before going to bed. The next morning when I got up and removed the poultice, I felt excellent results – results that were just as good as with the analgesics that the doctor had given me!” CharcoalRemedies.com page 101

To find out more how charcoal can help you treat eye infections and other common ailments, simply and naturally, right in your home, order the book CharcoalRemedies.com now. 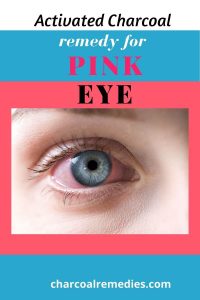 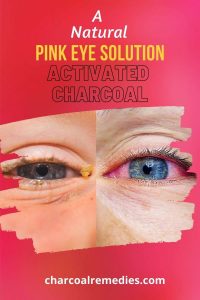