How to Remove Chloramine With Activated Charcoal

The reasoning goes that chloramine is much more stable than chlorine and does not dissipate from the water before it reaches consumers. Chloramine also exhibits less tendency to convert organic materials into chloroform, carbon tetrachloride, and other chlorocarbons. These compounds have been identified as carcinogens and in 1979 the U.S. EPA began regulating their levels in U.S. drinking water. Another big point in chloramine’s favor, water treated with chloramine lacks the distinct chlorine odor with a corresponding big improvement in taste. But…

Chloramine turns naturally blue water to a lime green color. Apart from aesthetics, the fact of the matter is that chloramine is toxic! That is why they use it as a disinfectant. Aquarium owners must remove the chloramine from their tap water because it is toxic to fish. Many animals are sensitive to chloramine and it must be removed from water given to many animals in zoos. Even though the digestive process neutralizes chloramine in chloramine-treated water, it must be removed from the water prior to use in kidney dialysis machines where the blood would be exposed to it. It is high chloramine levels in swimming pools that accounts for most complaints of eye irritation.

The primary disadvantage of chloramine is that it is a much weaker and slower acting disinfectant than free chlorine. It is particularly weak for inactivating certain viruses. 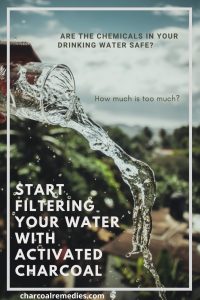 According to the Environmental Protection Agency (EPA), drinking water chloramine levels that meet the EPA standard are associated with minimal to no risk and should be considered safe. Chloraminated water is said to be safe for drinking and other general household activities such as bathing, cooking, laundry, and cleaning. The water can also be used for gardening (the water is safe for plants) and for watering lawns with no adverse effects.

But the fact remains that chloramine is considered potentially toxic in levels higher than 4 mg/L. With more and more water systems using chloramines there is growing concern that there may be a cumulative impact on one’s health. Consequently there is a growing interest in safe economical systems to reduce or remove chloramine in drinking water as well as for aquariums and hospitals.

Boiling the water or letting it sit out in an open container at room temperature will not effectively get rid of the residual chloramine. Point of entry and point of use (POE/POU) devices can be used to eliminate the chloramine in household water. POE/POU devices that remove chloramine are filtration systems with granular activated carbon or charcoal.

The National Sanitation Foundation (NSF) independently tests and certifies water treatment systems that remove chloramine. In order for a product to earn “certification” for reduction of chloramine, it must be able to reduce chloramine from 3 mg/L (ppm) to 0.5 mg/L (ppm).

While activated carbon charcoal is known to reduce both chlorine and chloramine in drinking water all activated carbons are not created equal. In one comparison study three activated carbon samples (Fire Brand™ Enhanced Activated Carbon, Competitor Brand, and standard coconut based carbon) were pulverized, contacted with a 4.2 or 4.1 ppm chloramine solution in water. Chloramine reduction was monitored over ten minutes. The activated carbons that decomposed the chloramine faster, exhibited greater surface modification.

Thanks for reading! If you’d like to learn more about the uses of activated charcoal, check out the complete handbook on medicinal charcoal and its uses. Also available in Spanish. Below are some of the reviews from Amazon.

Why is chloramine the preferred method of disinfecting water?

The reasoning goes that chloramine is much more stable than chlorine and does not dissipate from the water before it reaches consumers. Chloramine also exhibits less tendency to convert organic materials into chloroform, carbon tetrachloride, and other chlorocarbons.

Is chloramine a carcinogen?

These compounds have been identified as carcinogens and in 1979 the U.S. EPA began regulating their levels in U.S. drinking water.

Is boiling water an effective method to remove chloramine?

Boiling the water or letting it sit out at in an open container at room temperature will not effectively get rid of the residual chloramine.

What is the best way to remove chloramine from water? 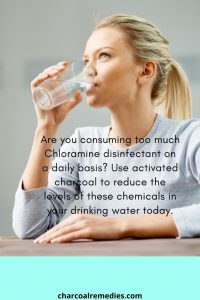 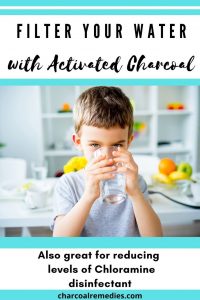 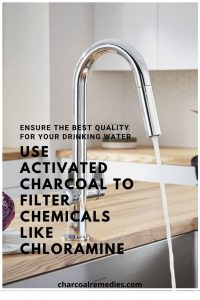