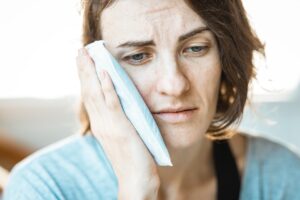 Dr. Dana: “I recommend to all my patients that they have a supply of charcoal in their emergency kits. For tooth abscesses, I take a tea bag and slit open the bottom. I then empty the contents, and replace them with charcoal powder from three to four capsules, and tape the bag closed. It is then moistened, and placed against the offending tooth.” CharcoalRemedies.com page 101

Helen is an RN. Over the years she has treated herself and her family with charcoal. They have also treated people that they have brought into their home. “My first experience with charcoal was when I had my four wisdom teeth removed. The pain was intense. A friend suggested charcoal. I took four charcoal tablets and positioned one at each spot where a tooth had been removed and held it there with the cheek. The pain left almost immediately. As they dissolved, I would replace them. I continued this routine until the gums had healed. I have since used my experience to help others.” 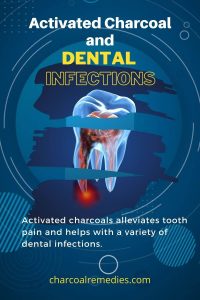 Cyndy was thirty-seven years old, and scheduled to have all of her teeth removed. Her entire mouth was infected, and the dentist had drained two cups of pus from the gums. The pus was compromising her health, so he scheduled her for an appointment in two weeks. Cyndy was not ready to lose all of her teeth.

“We suggested fever therapy to help raise her immune system, but she was not consistent in following our directions. She ended up coming to stay with us. It was such a severe case that we had to make a very thick charcoal gel and pack her cheeks with it. She had to drink through a straw and, except for meal times, we kept her mouth packed with the charcoal. She accepted this treatment, and after one week the infection was completely gone. There was no need to remove even one of her teeth! The dentist was completely amazed.” CharcoalRemedies.com page 142

John chipped a lower rear molar at a time when their income didn’t allow for an expensive visit to the dentist. “Dental insurance from my work did not kick in for two more months, so I decided to wait it out till then and have it capped. But the root ended up dying, and the pain was not going to wait. But I used charcoal to tide me over. I placed a charcoal tablet between the tooth and the cheek and kept one there until I got to see the dentist.”

Ruth is an RN and public health lecturer. “Before leaving for India I broke a tooth. Since there was no time to see a dentist, and because it was not bothering me, I decided to go. But on the second day after arriving in India it began to throb. By the next morning my mouth was quite swollen. I made a small charcoal poultice wrapped in a small piece of cloth, moistened it and placed it up against the abscess. I did this for two days. I noticed pus on the poultice when I removed it, and discovered a small drainage hole in my gums. The pain and the swelling disappeared, and I was not troubled with the tooth again until after I returned to the States. Then I had it looked at by a dentist.” CharcoalRemedies.com page 143

I had what I thought was a very bad toothache, and it was getting worse by the minute. My left cheek starting to really swell up, so much so, that my sympathetic hubby started to call me ‘Chippy,’ as I looked like a chipmunk, with a golf ball in her left cheek! 🙂

The fact was, I had a huge abscess and I was ready to have my tooth pulled, but a two day snowstorm prevented me from doing so, I am so glad!!

I tried to put a mixture of charcoal, water and ground flax seed in my mouth, but it was gagging me and the pressure was hurting my teeth. I tried putting charcoal tablets next to the tooth that was hurting and it too hurt my mouth. All I could do was put on Thieves Oil, of which the cloves in it, would help numb the pain some. I couldn’t sleep, I was in so much pain.

Then it finally dawned on me to make a charcoal poultice. Yes of course we are surrounded by charcoal, my hubby wrote a book on it, but, the obvious was just too obvious! I made a poultice, went to bed with it on and I slept!! In the morning, the abscess was half the size. Another few nights with a poultice on and it got down to a size of a half marble. From there I was able to put a charcoal tablet or two on it and it began to disappear.

I like to make big poultices and thick. You can’t use too much charcoal but you can use too little to do any good. The charcoal needs to be wet, as if it is wet, it has more drawing power. I wrapped it with an ace bandage that sticks to itself, these are the best for making poultices. When I made my poultice, I used about a third to half cup of very warm water, 2 heaping Tablespoons of activated charcoal powder and about 2 Tablespoons of ground flax seed. If the charcoal jelly is too thick, just add more warm water, if it is too runny, add a little more ground flax seed.

After you get the jelly made, pour it into the middle of a paper towel, and spread it out like a long jelly roll.  Then fold up the long edges, then the short edges, so that you have all the folding on one side.  Put the side that has only one layer of paper against your skin, (if the paper that is going against your skin is not real wet, then sprinkle some warm water on it), then put a piece of plastic food wrap on the poultice to help keep it wet and to keep it from leaking. Then apply your ace bandage and you’re done! For my face, I wrapped an ace bandage first vertical, than a separate one horizontally and it did not come off while I slept. You might want to use a pillow case you don’t care about just in case it leaks through the night.

As for putting the charcoal tablets on, for me, the tablet needs to be very wet. Putting the tablet against the tooth or onto the abscess, and then drinking warm water so that the tablet gets almost mushy, works best for me.

A few years back my upper back molars began to give me grief. Looking back now, I think if I had started using some charcoal on each tooth the outcome would have been different. But I had good excuses, right? In any case my dentist finally recommended a root canal for one and a year later for the one on the opposite side.

It had been some time that I had not been able to bite down firmly with my back teeth, but after the root canals I did have a stronger bite – at least for a while. Then after about six months both teeth (gums) began to give me grief again, only this time I did not want to consider having them redone or removed.

So I asked my wife to mix up a thick jelly of charcoal powder in warm water with psyllium seed husk powder (approximately 1/4 cup water, stir in 2 Tablespoons of charcoal powder, then add slight teaspoon of psyllium powder, and keep stirring until it turns to a jelly). After it set for a while in the fridge I spooned off a small portion and put it in my mouth behind one top molar, and then did the same for the other, and went to bed for the night. I placed a paper towel over my pillow in case I drooled during the night.

The next morning I was pleased to find the pain in both teeth (gums) was noticeably less. Sometime during the night I must have swallowed the jelly – it is very slippery. (This is nothing to be concerned about)

With that good result (I was not really that surprised, just annoyed with my stupid excuses for putting it off so long) I continued that routine for about two weeks until there was no pain at all. The bite from the two molars was better than it had been for many years. Then, about two weeks later the pain in my left upper rear molar (gum) began to return, so I resumed my nightly treatment, only this time the pain only continued to intensify, and after five days I quit. I was not sure what was happening, but I had no desire to push the experiment.

The area around the right rear molar remained pain free, but I noticed the gum around the left one was beginning to swell and getting more sensitive. After about two weeks of not getting any better, I decided to try the charcoal jelly again. I did not know what to expect, relief or pain. The next day the pain was noticeably less again. That was four nights ago, and this morning the pain is almost gone again, only there is still some swelling around the back of the tooth.

What is happening? Not sure, except the pain is almost history again. But if I stop now, the inflammation will most likely set the gum up for more pain. This time I plan to continue until all swelling is gone, with another week or so for good measure. Will report back later…

John – husband of woman in above testimony.
Nebraska
December 31, 2017

To find out more how charcoal can help you treat dental infections and other common ailments, simply and naturally, right in your home, order the book CharcoalRemedies.com now. 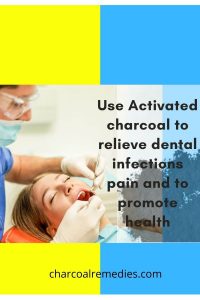 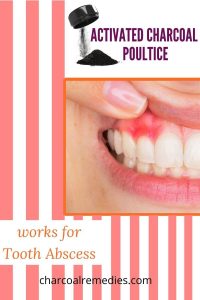 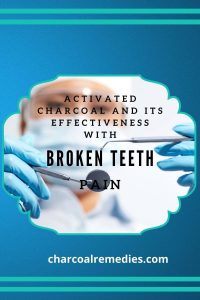 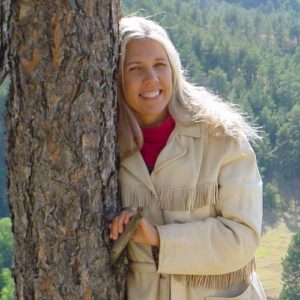 Kimberly Dinsley and her husband John are the founders and owners of Charcoal House LLC. Kimberly oversees much of the day-to-day operations of the business and several websites and Blog. She was born and raised in the noisy Twin Cities of Minnesota, but now enjoys the quieter country life of NW Nebraska. Even with all her office responsibilities she still manages grinding wheat to make bread, gardening, tending her growing flock of chickens, and ever learning to make delicious vegan fare. She has become quite adept in giving natural treatments and assisting her husband with health seminars and workshops.