Wounds of any kind can easily become infected which can then lead to worse complications. Activated charcoal has been shown to neutralize many different kinds of pathogens that directly or indirectly produce or promote infection. Activated medicinal charcoal binds these toxic substances and organisms so that the body can often heal itself.

Researchers studied the effect of Activated Charcoal Dressings on healing outcomes of chronic wounds.* Two separate randomized controlled trials (RCTs) were undertaken; both used the same hydrocolloid as the control. One RCT compared Actisorb (without silver) with the control on chronic pressure ulcers and the other RCT compared Actisorb Silver 220 with the control on chronic venous leg ulcers. Patients were followed for four weeks. Sixty patients were enrolled into each study. There were notable differences in results at week 1 in favor of the charcoal dressings in both studies, although the results for the two groups in each study were comparable at week 4. The activated charcoal dressings were better tolerated than the control. Conclusion: “These clinical data indicate the potential usefulness of using activated charcoal impregnated with silver in the management of chronic wounds, even at the debridement stage. This dressing may help remove fluids and toxins that impair the healing process. (May, 2010) 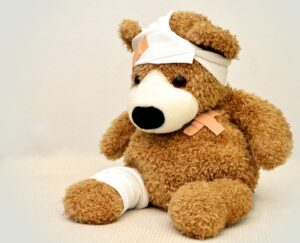 Knowing just enough of the challenges of their next home, mixed with some apprehensions, Jeff and Bobbi agreed they better be prepared for any unforeseen emergency. When they decided to leave their familiar surroundings in America and make their new home in the unfamiliar jungles of Papua New Guinea for several years, they took along a fifty-pound sack of activated charcoal. It wasn’t long after they arrived that it was called into duty.

Bobbi writes, “We used charcoal shortly after arriving in the village. Pasiyata (one of the local women) had gone to gather sago – a common food staple of the area – and had gotten a sago thorn in her upper thigh. The thorns from the sago tree are very long and very sharp. Even after we removed the dead skin over the wound, there still was no sign of the thorn. It was very deeply embedded, and was infecting the surrounding area of her leg. Every day she would come to our house in the morning and evening. We did hot and cold treatments, and then we wrapped her thigh in a charcoal pack. After about one week the charcoal drew out the thorn – all two inches of it. From that day on we were promoted as people with powerful medicine.”CharcoalRemedies.com page 91

Dr. Dana, NMD writes: “Between my first and second year of medical school, the grandfather of one of my classmates had been told by his doctor that his foot was so badly infected it needed to be amputated. He had already lost a toe and did not want to go that route. I had the night care of this man and overnight I placed a charcoal poultice over the foot. We continued this practice for a month. We were rewarded for our efforts by seeing the foot turn from black back to a healthy pink. After the month, he was once more up and about. We also gave him some simple hydrotherapy treatments, and instructed him on how to improve his dietary habits.” CharcoalRemedies.com page 100

The doctors Thrash relate this case of an overdose of X-ray. “We had a patient who had a large, deep ulcer (twelve inches in diameter) due to an x-ray burn on his back. The burn was from an overdose of x-ray used for treating a skin cancer. The ulcer became infected and foul smelling. His entire house smelled of the ulcer, despite the most fastidious care. We started dressing the ulcer by sprinkling dry charcoal from a salt shaker on all the moist areas before applying gauze. Instantly the odor vanished from the ulcer and gradually left the house. Although the patient eventually succumbed to the radiation sickness, he and his whole family were grateful for the charcoal.”

The foul smelling wounds caused by the bacteria Bacillus pyocyaneus can be dissipated in one treatment by the use of charcoal. Healing is also improved, as the charcoal takes up bacteria. One good way to apply charcoal to a foul ulcer is by putting some of the powder in a salt shaker with a few grains of rice. With every bandage change, shake the powdered charcoal on the wound. Eczema has also been successfully treated using charcoal, especially where there are infections and odors.

The prestigious British medical journal, The Lancet, reported this exciting study. In varicose leg ulcers and in infected surgical wounds, a single layer of charcoal cloth covered with a porous fabric sleeve dressing gave a noticeable reduction in wound odor in 95% of 39 patients. Wound cleansing was also noted in 80 % of the patients. There were no adverse reactions to the material. The dressings did not stick to the wounds and could be removed without difficulty. Because the human skin allows for the transfer of liquids, gasses, and even micro-particles through its permeable membrane and pores, it was also shown that warm, moist activated charcoal poultices were actually able to draw bacteria and poisons through the skin and into the poultice. CharcoalRemedies.com page 149

To find out more how charcoal can help you treat infected wounds and other common ailments, simply and naturally, right in your home, order the book Charcoal Remedies.com now.

hi I’m not able to get the free book, as an error is showing on your site, but it’s not the fault of my computer as I entered my first name and email address as request