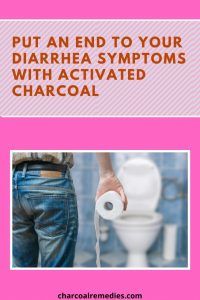 Many folks think of diarrhea (“loose, watery stools occurring more than three times in one day”) as a disease, but initially, it is simply the body’s way of trying to throw off some toxin or pathogen before they can produce even more serious complications. If it does its job and the bowels return to normal function, then we can be thankful. But diarrhea is no little problem. Too often the diarrhea does not shut off and brings the body to the point of severe dehydration and loss of essential electrolytes. What should be a normal physiological response to some toxin becomes dysfunctional and creates even more problems. In severe cases, death can quickly follow. Common causes of diarrhea include:

In cases where diarrhea is triggered by some toxic substance, whether ingested directly or produced secondarily by bacteria, viruses, or as a functional problem of the bowels, activated charcoal has been found to be a potent remedy.

John was desperately ill. Beth wakened to find him on the toilet. She had no idea how long he had been there. The floor was wet from his dripping sweat. He couldn’t stand, and he felt like another bout of diarrhea every time he tried. John was running a high fever and was exhausted.

It was two in the morning, and Beth didn’t know what to do. They had used charcoal so many times, but this seemed far more serious. It was all Beth could think of, so she had him take ten tablets as she handed him one at a time. Then, unsure what to do next, Beth prayed, “Lord I have done what I could. Now you need to bless this simple treatment.” Within ten minutes, John was able to go to bed and rest. By morning the fever had subsided, and he improved steadily.

When John and Beth moved to India, they were, like most, plagued with dysentery. Typically, people were given a broad-based antibiotic containing Flagil. But because their daughter was allergic to the antibiotic, Beth only used charcoal for her. Being surrounded by poor sanitary conditions, they were constantly fighting the diarrhea. In the first three years they finished off five thousand tablets. They also used the charcoal ground up as a poultice to put on boils and the many bites that easily became infected.

While it is not always possible to identify what the underlying disease may be, because charcoal is harmless, you may safely give it for any number of bowel problems. Those with especially sensitive bowels, as in chronic ulcerative colitis, can simply stir a tablespoon of charcoal into a glass of water, let the sediment settle out, and drink the gray water. Do this regularly with your daily intake of water. CharcoalRemedies.com page162

Diarrhea, along with vomiting, are common to many diseases and conditions, but they are classic symptoms of cholera.

“After leaving the island of Kuria, we anchored in the sheltered coral bay of Maiana. One could only suppose the waters to be the purest anywhere in the Pacific. But various diseases have found their way across the distances, and contaminated the fragile water table, and even the bays…. As we visited with the government nurse stationed on the island, I mentioned the use of charcoal for various problems, and asked if she had ever had occasion to use it. “Oh yes!” she replied. “A while back, when all my conventional drugs had failed to help in a severe case of cholera, as a last resort, I administered charcoal and the patient fully recovered.” CharcoalRemedies.com page 29

In their book Rx: Charcoal (page 73), the Doctors Thrash tell about the experience of one traveler who got sick abroad only to find no help when he returned home. “A prominent Columbus, Georgia, executive was traveling to Mexico when he developed a bad case of tourista [the common euphemism for diarrhea amongst tourists. It is generally caused from E. coli bacterium in unsanitary food and water]. He was having diarrhea two to three times an hour on the first day of his disease, with much discomfort in the abdomen. A doctor treated him with the usual antibiotics and Lomotil. A week later, when he returned home, he consulted his own doctor because the condition had settled down to three to five diarrhea stools a day, with continuing discomfort. He got a change of medication but no change of symptoms. After twelve days of the disease and eight different medicines, he called us, desperately seeking suggestions for a natural remedy. We began a routine of one tablespoon of charcoal in a glass of water, followed by a full glass of water every time he had a loose stool. Within two days he was entirely well… and sold on charcoal. Now he never travels without charcoal, and always takes a tablespoon with the first hint of a symptom.”

Then there are the more well-informed travelers, like John and Sharon. They headed off on their trip to Mexico with well-wishers warning them about this and that health hazard. But, tucked into their suitcase, as it is no matter where they go, was a bottle of activated charcoal. “We traveled with no worries at all, because we knew we were covered. As a precaution, we took a couple tablets every other day. Then we went ahead and thoroughly enjoyed our winter retreat. Sharon even enjoyed a worry-free fresh cut orange from a street vendor.”

For those of you planning to travel, especially to developing countries, I would suggest including charcoal in your first aid kit, and not just for yourselves. Remember there are many travelers who know nothing about the benefits of charcoal who may need what you have. CharcoalRemedies.com page 65

When it comes to trying some new remedy, we all feel better if someone who is well qualified will give it their thumbs up. Dr. Mervyn G. Hardinge, MD, Dr. PH, PhD, the founding dean of the School of Public Health at Loma Linda University, has broad-based experience in the fields of pharmacology, nutrition, and health. Holding degrees from Harvard and Stanford, he has authored more than fifty scientific papers in peer-reviewed journals as well as several books, including the three-volume Family Medical Guide. We would expect he is eminently capable of speaking on the merits of charcoal. In his most recent book Drugs, Herbs, & Natural Remedies, he places charcoal under the heading of “harmless.” Of its more common uses, he lists it for relief from gas, as a laxative, for inflammation of the bowels, for Colic, diarrhea, ulcers and pain. When I called and talked to him on the phone he assured me that he has always been a strong supporter of simple remedies.

When I asked if he had any memorable charcoal stories he replied, “Yes. An old but very vivid one comes to mind. While attending a camp meeting, our fifteen month-old son contracted a good case of diarrhea. He was, nevertheless, still very active, running around. But as he ran the contents of his diaper dribbled out behind him making no little mess for us to clean up. By the time we were ready to leave, his bottom was so raw, he would scream when his mother tried to change his diapers. Driving through Oklahoma I stopped at several pharmacies along the way to see if they had any charcoal, but none of them carried it in their store. Finally I stopped in a small village and was able to find some charcoal tablets. We ground them up, but then wondered how we were going to get a fifteen month-old baby to take it. We decided on peanut butter. We mixed it in with the charcoal, and within a short time he was no longer bothered when it came time to change his diapers. I have always encouraged the use of natural remedies and we have used charcoal through the years for an assortment of infections. For instance, for a cut on the hand we would make a simple poultice and wrap the hand completely.” CharcoalRemedies.com pg. 163

Many have found they have been able to control their diarrhea if, after each loose or watery stool, they drink a mixture of one to two large spoonfuls of charcoal powder (or 6-12 capsules) in a glass of water. Follow each glass of charcoal water with one or two glasses of plain water.

For very stubborn cases of diarrhea we recommend a charcoal poultice over the abdomen in place of taking charcoal internally. Read Georgia’s Story for such a case.

To find out more how charcoal can help you treat diarrhea, vomiting, and other common ailments, simply and naturally, right in your home, order the book CharcoalRemedies.com now. 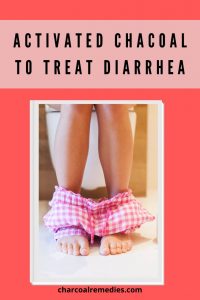 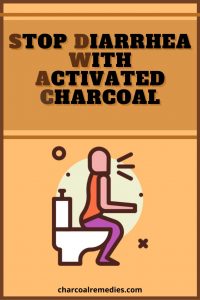 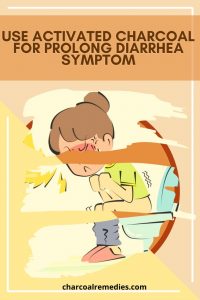